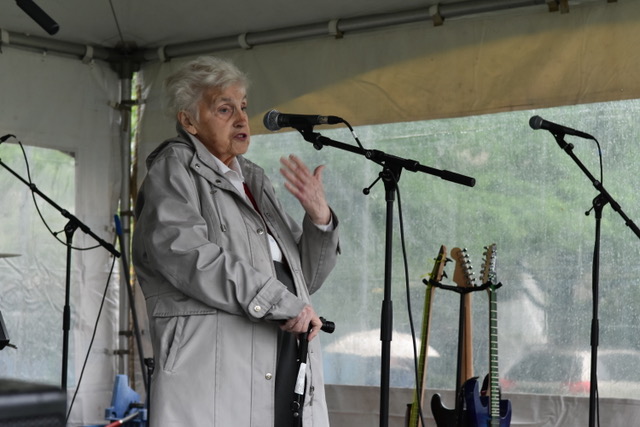 Chris Taulu is recognized for her contributions to the Renfrew-Collingwood area at the 2019 Collingwood Days Festival. On right: Chris stands with Jennifer Gray-Grant, Executive Director of Collingwood Neighbourhood House (CNH).

We would like to recognize those who give so much to Renfrew-Collingwood by accepting nominations for 2022.

Nominations are open from May 1 to July 1, 2022. The nominating committee will present the award to the 2022 recipient on July 23 at Collingwood Days Festival at Gaston Park.

In May 2019, Chris Taulu was recognized and celebrated for her enormous contributions to the betterment of Renfrew-Collingwood. She received the first-ever Community Excellence Award at Collingwood Days Festival, supported by her colleagues at the Collingwood Policing Centre, friends and community members.

The recipient of this award exemplifies the qualities of leadership, equity, compassion, mentorship and commitment to the Renfrew-Collingwood community.

Chris Taulu has been an advocate for the community and pillar of our city for more than 45 years. Her activism first took off in the 1980s when she began to help champion improvements to children's education. In 1994, she pioneered the establishment of Collingwood Community Policing Centre, the first organization of its kind in Vancouver and the model for what would grow into 11 community policing centres in our city today. It was here at Collingwood that Chris dedicated years of her life to creating safe communities through a partnership between the police and the people of Vancouver.

Chris is one of the founders of the Collingwood Neighbourhood House, worked with the Living in Community Society to support marginalized sex trade workers, and was active in efforts to promote social housing, quality public education, and crime prevention. Chris has an incredible list of accomplishments, including her work on the Collingwood Village project, her formation of a city-wide parent association, her part in the founding of the Living in Community project and the SAFE project, as well as her current work on the Joyce Station Plan.

The nominating committee will present the award to the 2020 recipient on May 30 at Collingwood Days Festival at Gaston Park.

How to make a nomination

Nominations for the award can be emailed to: partap@collingwoodcpc.com or dropped off at the Collingwood Policing Centre (5160 Joyce St, Vancouver).

Please include: Name of nominee, summary of their achievements and their contact information.