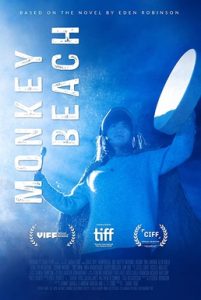 About the Movie: A young woman with supernatural abilities reflects on profound events in her life as she awaits news of her brother, who has gone missing at sea under questionable circumstances.

Monkey Beach is a 2020 Canadian drama film, directed by Loretta Todd. Her debut narrative feature, the film is an adaptation of Eden Robinson‘s 2000 novel Monkey Beach.[2]

A filmmaker and artist of Cree/Métis and European ancestry, Loretta Todd was one of the first Indigenous women to pursue film studies at Vancouver’s Simon Fraser University. Employing a distinctive approach to documentary cinema, she has directed award-winning films such as The Learning Path (1991), Hands of History (1994), Forgotten Warriors (1997)and The People Go On (2003). She has also created video installations for Vancouver’s Museum of Anthropology and other gallery venues. The recipient of a Rockefeller Fellowship and a former participant in the Sundance Institute’s Scriptwriters Lab, Todd has received lifetime achievement awards from imagine NATIVE and the Taos Talking Pictures Festival.

Recommended for +12 due some disturbing language.