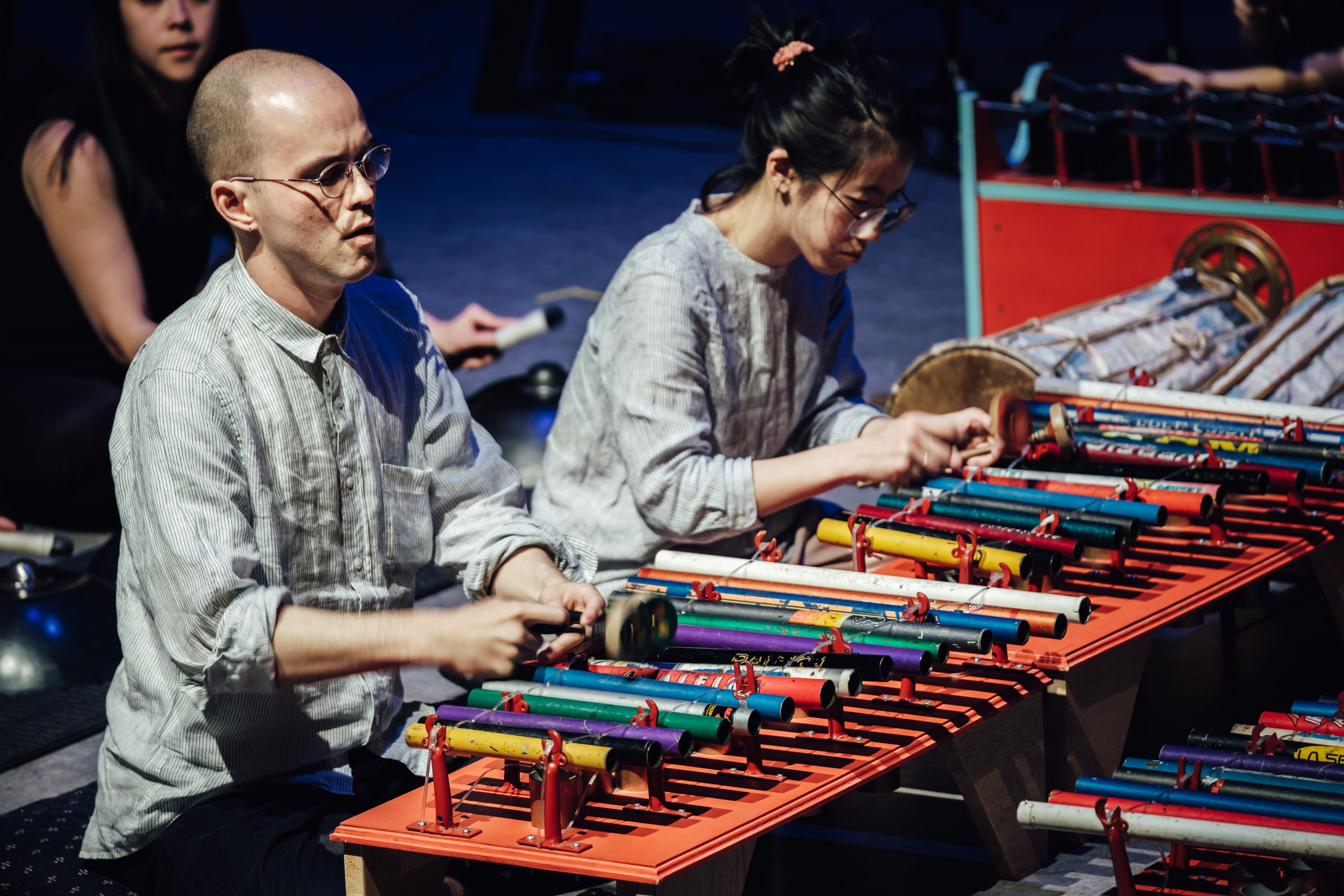 Celebrate a variety of creative performances in Renfrew-Collingwood at the Annex Arts Roll-Out!

June Fukumura (MC) is a Japanese Canadian theatre artist with a BFA in Theatre Performance from Simon Fraser University (SFU). Her practice includes acting and performance, clowning, dramaturgy, puppetry, and devised experimental theatre. June is the Co-Founder of New(to)Town Collective (2014 – present) an artist collective with a mandate to create new experimental works; provide ongoing accessible physical theatre training; and experimental research workshops in Vancouver. June is also the Co-Artistic Director of Popcorn Galaxies (2013 – present) an experimental theatre company interested in re-enchanting the everyday through unconventional site-responsive works. She is the Assistant Dramaturg at the Playwrights Lab at the Banff Centre for the Arts and was the Emerging Dramaturg for Vancouver Asian Canadian Theatre in 2019/20. Recent acting and performance credits include: Akashi by Mayumi Yoshida (feature film workshop, 2020); Otosan by Shizuka Kai (workshop presentation, Little Onion Puppet Co., 2019); My Name is SUMIKO by June Fukumura (Vancouver Fringe Festival, New(to)Town Collective, 2019); and Forgiveness by Hiro Kanagawa (New Play Festival, Arts Club Theatre, 2019).

Gamelan Bike Bike (2:20-3:00 pm) draws its musical inspiration from Bali, Indonesia and its raw materials from the scrap metal bins of Vancouver. In 2012, instrument maker George Rahi collected over 100 discarded bicycle frames to build the instruments, configuring the colourful metal scraps into various types of metallophones instruments. The 10 member ensemble is dedicated to performing new works for gamelan, including recent compositions from guest composer I Putu Gede Sukaryana (Balot) from Bali. The ensemble has presented performances with the Western Front, Vancouver New Music, and the Vancouver Folk Music Festival, and in 2017 released Hi-Ten, a collection of original works with the Indonesia-based label Insitu Recordings.

Find Mutya aka mutya macatumpag (3:15-3:45 pm) is a queer filipino of Spanish and Malayan descent, born a settler on the unsurrendered ancestral Coast Salish Territories of the xwməθkwəy̓əm (Musqueam), sḵwx̱wú7mesh (Squamish), and Tsleil-Waututh nations. Mutya is an interdisciplinary artist who combines music, movement, theatre and visual arts within her professional practice as a vocalist, creator, mc, performer, creative empowerment facilitator and event producer. While experimenting with a keyboard, looper, audio samples and guitalele, Mutya creates collages of sound landscapes. Her voice, a warm vibrato, lends a depth and emotion that has been described as transcending time and evoking ancient memories from within her audiences.

Passionate about social justice, Mutya seeks out opportunities to explore authentic exchange, while lending her leadership skills to empowering intergenerational communities through artistic expression. She has worked with a variety of intergenerational, intercultural and youth focused organizations across BC, Canada and the US. She is currently working with Partners for Youth Empowerment (PYE), IndigenEyez and Reel Youth. She recently completed a 13 week multi-disciplinary Glitter Technics workshop series at the SUM Gallery, and facilitated the NIKA Un-conference earlier this year with Pride in Art Society.

Treesong (4:15-5pm) is an interesting new Vancouver-based musical group formed by Brad Muirhead that features his original compositions for visual artist David Gowman’s hand made instruments he calls “Fuhorns”. The Fuhorns are weird and wonderful organically formed and individually unique pieces of musical sculpture, in that they are shaped the way they grew with some alterations by David to make them playable, and some custom carving at each end. Each individual horn has a unique tone color and also a unique set of notes it can play, vaguely reminiscent of “alpen-horns” but WAAAY funkier. The music ranges from rambunctious groove-based Afro-minimalism or angular rhythmic complexity to sonorous & soulful ballad-like songs. Improvised material also features prominently in Treesong performances.  The “Fuhornists” are all highly accomplished brass players from Vancouver’s professional music community, and one or two percussionists round-out the group. Treesong has a little something for everyone – it is a fun, musically interesting, visually striking, artistically advanced and entertaining musical spectacle not to be missed.

Nayana Fielkov is a performing artist living and working on the traditional, ancestral and unceded territory of the Coast Salish peoples–Sḵwx̱wú7mesh (Squamish), Stó:lō and Səl̓ílwətaʔ/Selilwitulh (Tsleil-Waututh) and xʷməθkʷəy̓əm (Musqueam) Nations. She brings together the mediums of clown, dance, mask and physical comedy. Nayana is co-creator and performer in multi award winning shows Falling Awake and Hotel Vortruba from RAGMOP Theatre, Habitats (supported by Canada Council for the Arts and BC Arts Council), the roving troupe The Ladies in White, the clown troupe Poupon Parade, the theatrical musical ensemble The Myrtle Family Band, and The Dusty Flower Pot Cabaret.

Willoughby Arevalo has been active in the performing arts since his youth, engaging in diverse projects including music, theatre, dance, and circus. He currently is a percussionist with the Carnival Band and performs as a bird on stilts occasionally. Costume by Carmen Rosen.

MirrorrorriM is a sculpted mirror installation created by Heather Dawn Sparks that works with light, lenses, and colour changing films to contort your reflection into unexpected shapes!!!

Heather engages collective action and inspired participation through immersive sculptural and performative works of art. Her dreamscape environments vividly bring to life forms from nature and the sublime absurdity of play.